Domestic abuse in the family court - the year for change?

Just over two decades ago the Court of Appeal was asked to give guidance on the approach to domestic abuse in child contact cases and Practice Direction 12J was born.

It details the approach of the court in cases where there is alleged or admitted domestic abuse suffered by a child or another party or where there is a risk of such abuse.

Due to the length in time since the law was last reviewed, could this year be the year for a change? As Sir Andrew McFarlane, President of the Family Division, said this week in a Court of Appeal case, “the last time these issues were looked at by the Court, the phrase was Domestic Violence. We have moved a long way from that. We now have more understanding that you can live in an abusive relationship where there is no violence at all”.

5 January 2021 saw the second reading of the Domestic Abuse Bill in the House of Lords which amongst many other things will bring a new definition of domestic abuse, as well as extra protection for victims and witnesses in court and removing the so-called “rough sex” defence.

The Court of Appeal is currently being asked to consider how the family court treats domestic abuse and coercive and controlling behaviour in a ground-breaking case, which has the potential to change the path for the future.

Details about the case

The landmark case, currently in the Court of Appeal, combines 4 separate cases regarding the welfare of children in domestic abuse cases and deciding how the alleged perpetrator should spend time with their children. The cases feature significant allegations of abuse by the victims including marital or partner rape and coercive control. Although, it must be added that the perpetrators deny all allegations.

The cases relate to appeals from previous decisions of a few Judges in the Family Division and highlight the need for the family courts to update their approach and how they view domestic abuse.

The family court is known for having a ‘pro-contact’ stance when it comes to child contact cases, so it can be a real struggle for a parent and their lawyer to protect the children and victim from harm.

Hopefully this year will be the year of change and the outcome of the appeals will provide new guidance for Judges on how the courts are to deal with such issues, resulting in greater protection and support for victims.

If you are in an abusive relationship and need advice, do not hesitate to get in touch with one of our specialist family lawyers. We offer a free 15 minute telephone consultation. I can be contacted on 01206 217389 or phoebe.trott@birkettlong.co.uk.

The UK government have recently launched a codeword scheme for anyone suffering domestic abuse and who is in immediate need of help. Go to a pharmacy and ask for ‘ANI’, pronounced “Annie”, which stands for Action Needed Immediately. They will be able to offer you a private space, a phone and support from the police or other domestic abuse support services. Look out for their image. 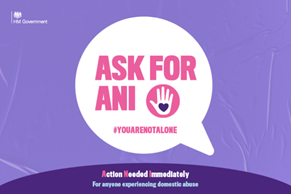